Missouri Trout Stalker
Saint Louis, Missouri, United States
I am an attorney in my early thirties with a serious fly fishing problem. I work at a large corporate law firm where things move pretty fast. In the midst of the hustle and bustle of corporate America, I try as often as possible to get away and enjoy a quiet stream. My blog attempts to detail the adventures I have both on and off the water in "My World on the Fly."

The Best Part of Duck Season

Much to my dismay, Duck season ended this past Tuesday in the middle zone of Missouri.  It was a strange season this year.  Things started with a bang but ended with a whimper.  We were "covered up," as they say, in early November but with mild weather and a delayed migration December slowed down significantly as the ducks that were here became educated.  My focus this year, however, was not wing-shooting.  It was the newest addition to the McCarty family, my baby girl Sage. 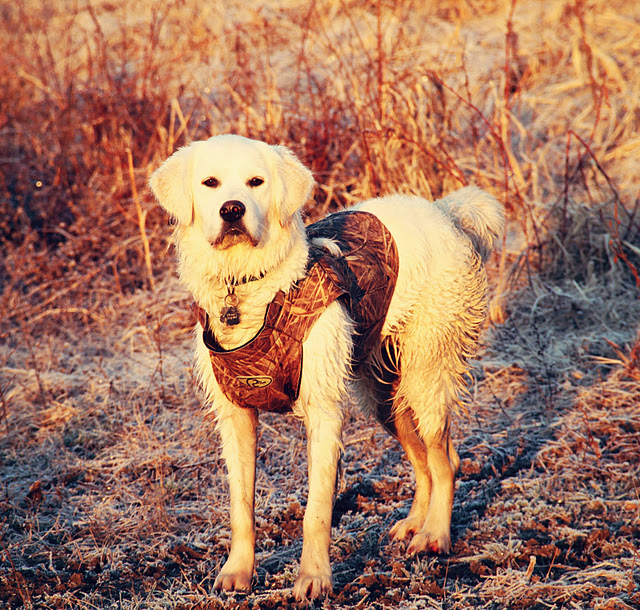 Sage was the highlight of 2011 for me, second only to the news that Sara and I are expecting a little hunter / fisherman this Spring--yes it's a boy!!  My little girl, on the other hand, is an English Cream Golden Retriever that Sara and I found last March at a breeder just outside of Kansas City, MO.  From the moment we picked her up, Sage has been at my side as much as possible.

This is what she looked like when we picked her up.  Doesn't she look like the biggest bad ass of the litter? 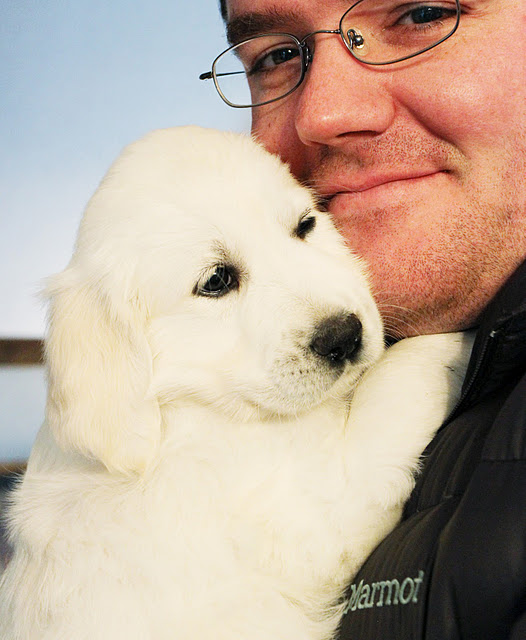 These are her parents, both canine and human.  Daddy dog comes from a long line of tracking dogs so I figured, if nothing else, Sage will have a good nose. 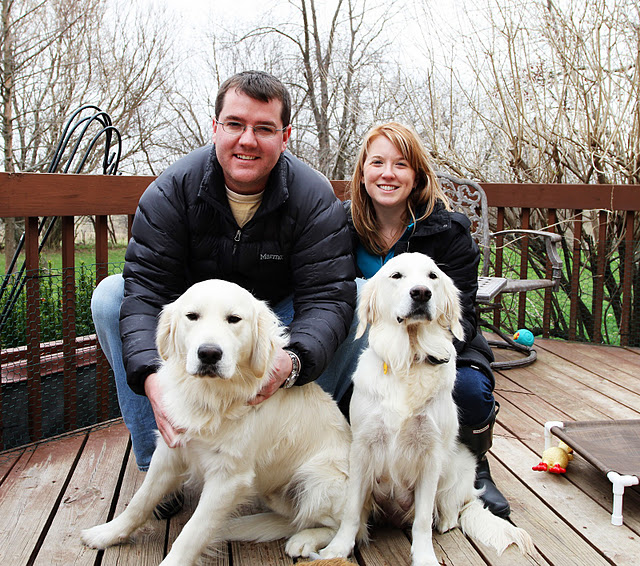 Sage is truly my best friend.  She with me on all my outdoor adventures. 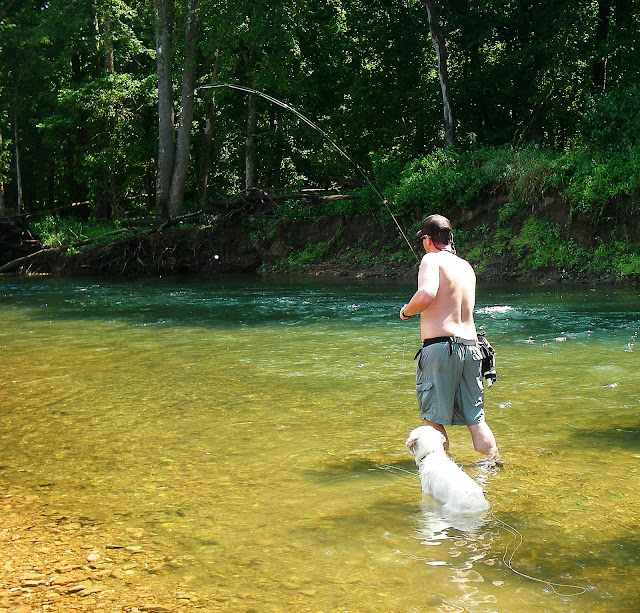 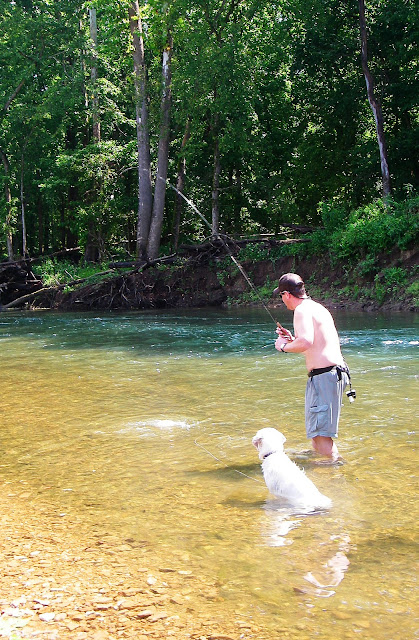 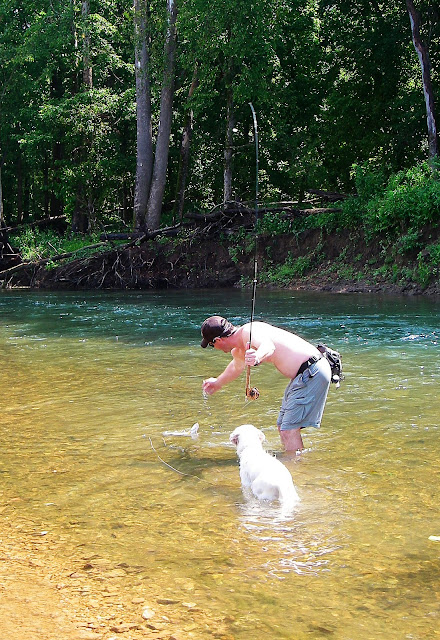 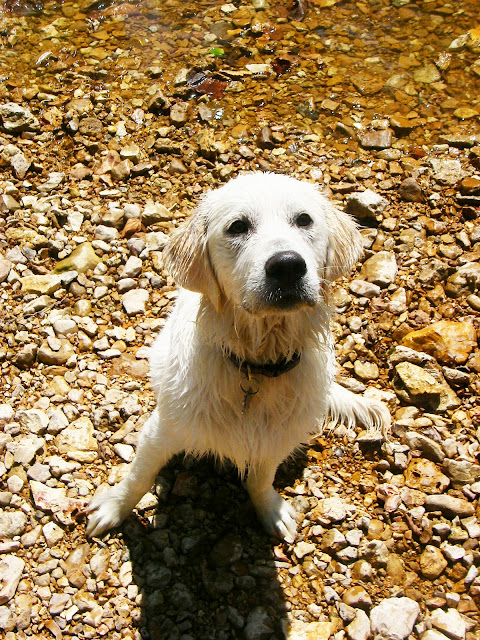 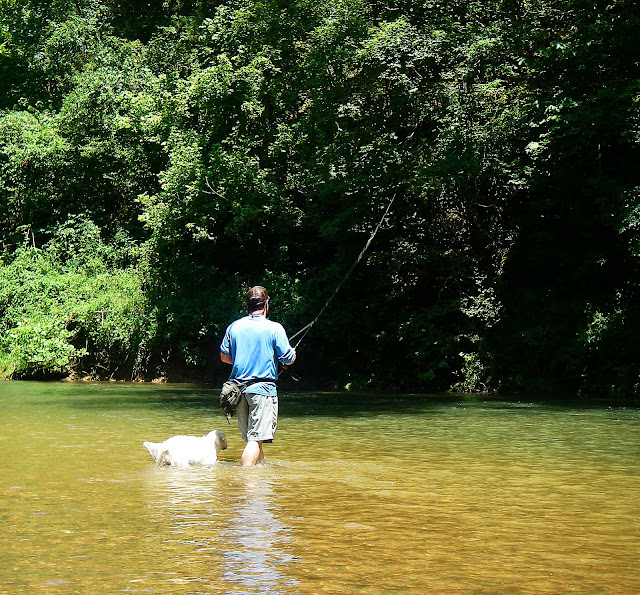 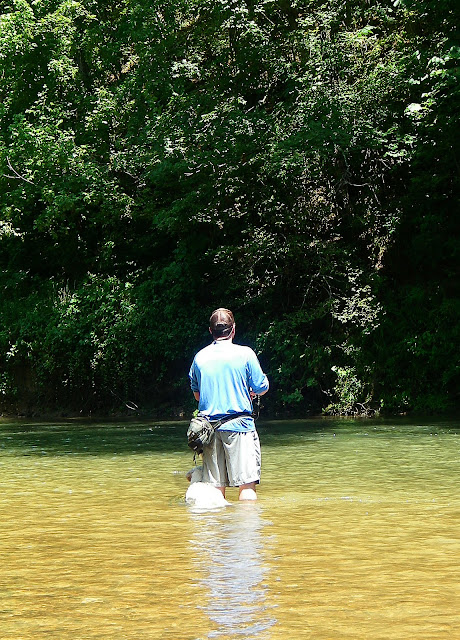 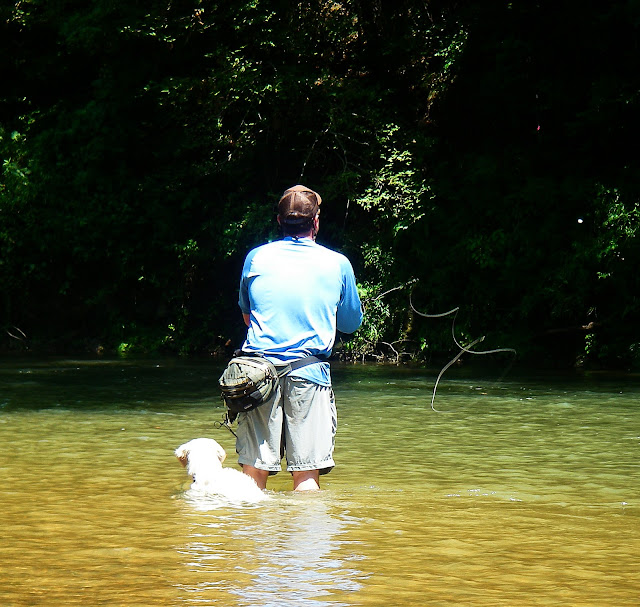 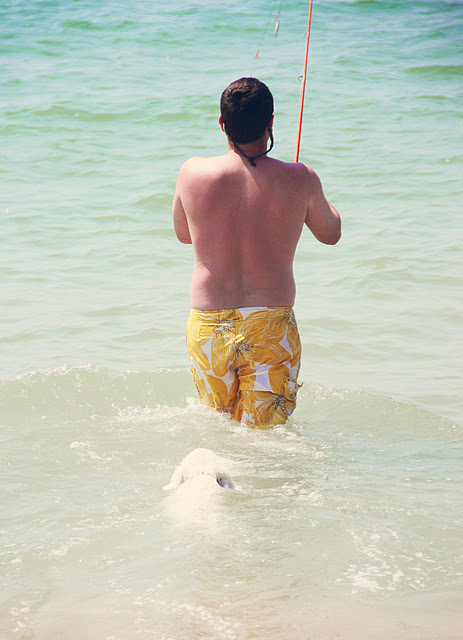 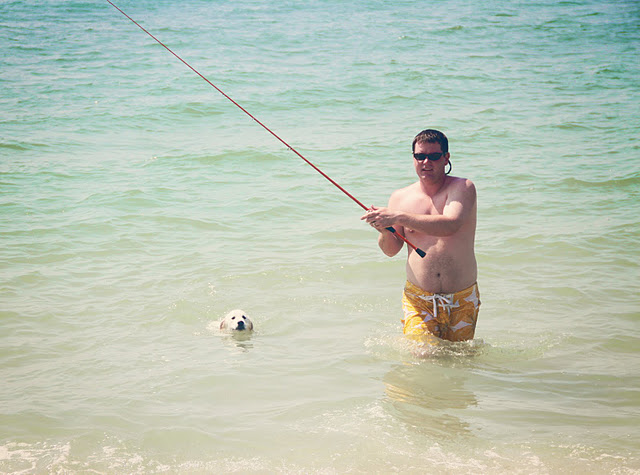 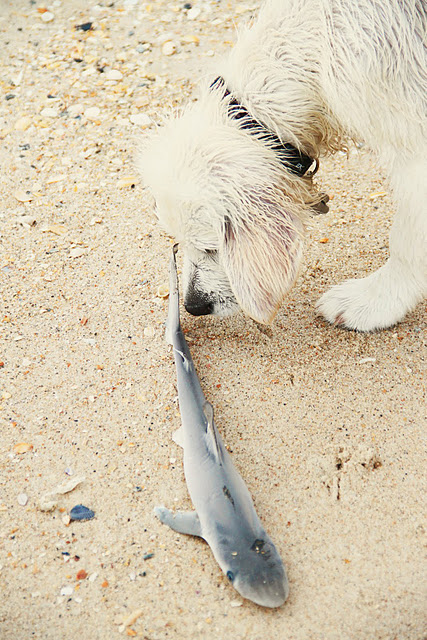 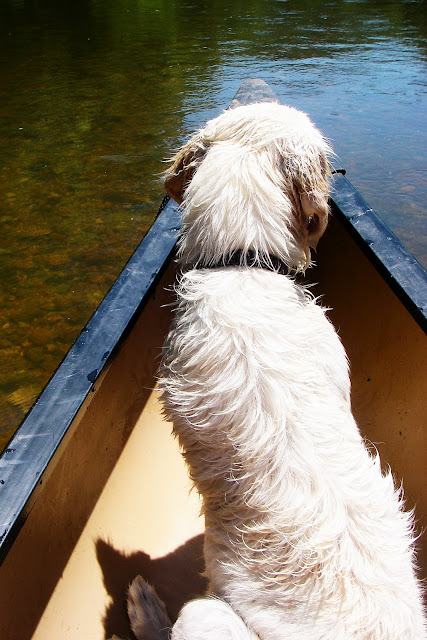 And of course, she hunts: 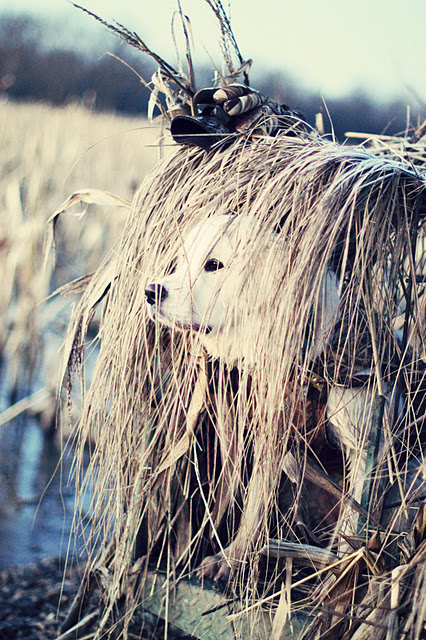 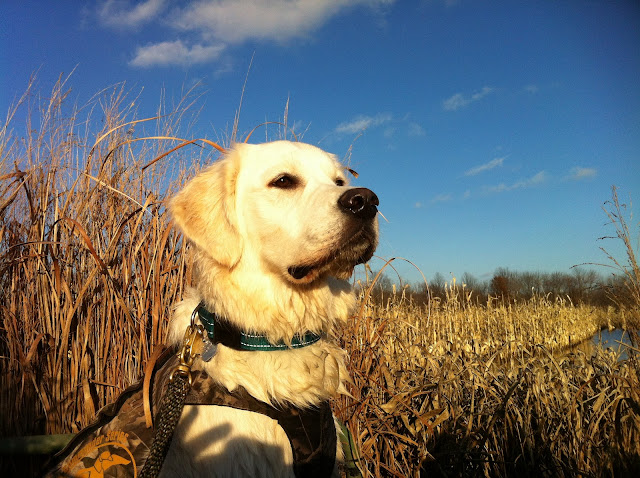 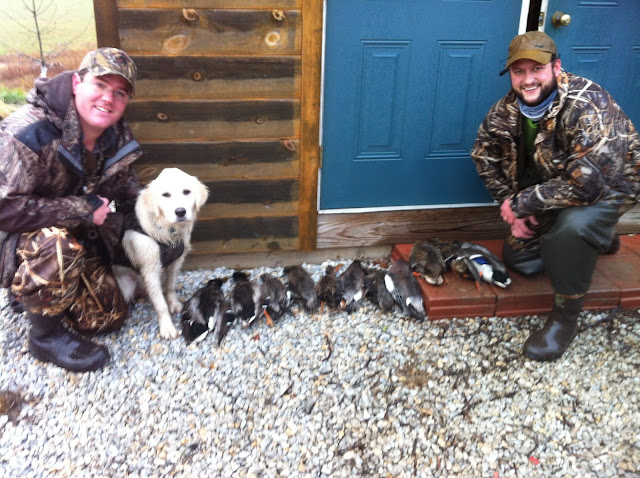 Teaching Sage to hunt is an ongoing and difficult challenge from a training perspective, but it's also the most rewarding.  Sara and I decided from the get-go that Sage was going to be a house dog and that we were not going to send her off to be trained.  That meant the onus was on me to get her ready for duck season.  I had only a few months as we picked her up in late March 2011 and our season starts in early November, not to mention dove season in September (and early teal season).
I got started by calling a dog-training, duck-hunting, trout-guiding, Smokey Mountain-dwellin', bad ass friend of mine who told me to read Richard Wolters' "Water Dog."  The book was, and continues to be, a great reference, but having Steve on call for my many, many questions that have come up along the way has been invaluable.  Seriously, if want to have your dog trained or get into some really big browns down in TN, I highly recommend Steve Sylvis (http://www.xtremetrout.com/).  He's truly a great guy.
Per Richard Wolters, Sage and I started with the basics--sit, stay, come, heel, down--she caught on pretty quickly.  We also began playing fetch at a very early age.  For example, here's Sage with her first Greenhead: 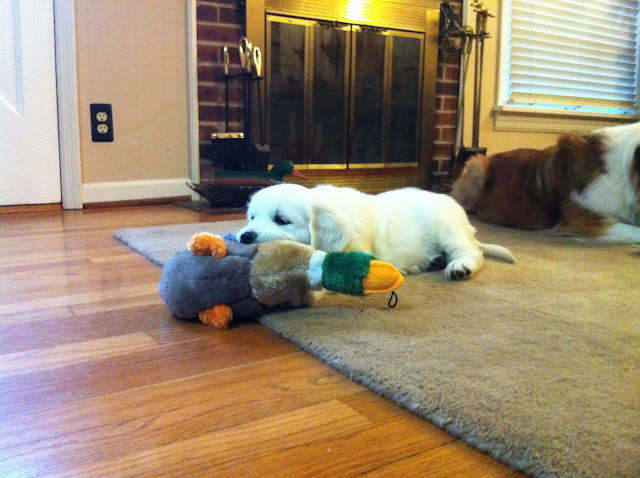 As she progressed, we swapped out voice commands for a whistle.  She sits well on the whistle but we're still working on the other commands.

Another very difficult chore was getting Sage used to shooting.  Per Steve, I learned that Goldens are much "softer" than Labs due to years of breeding them as house dogs and not working dogs.  They are much more timid about new things and have a tendency to rely on their handlers to a much greater degree.  I learned this lesson on an early season teal hunt with two buddies, one 10 month old lab, and my little 5 month old Sage.  The hunt went like this.  We knew a pack of 50 or so teal were enjoying a nice little slough just off the river.  The plan was to walk in intentionally spooking the birds with the hope that they would come back.  The plan worked.  We as we snuck in, the pack of blue-wings picked up almost immediately and began to circle the slough.  After a few passes, they eventually dropped low enough for a quality shot and we opened fire.  The first volley wasn't so bad.  We dropped two ducks, shooting only twice.  The lab went bounding for the first bird and, with an extremely proud father watching, my baby went out after the second bird.  As the dogs were in the field, however, the second waive of birds came flying over our heads and we cut lose again, this time each emptying our guns. We ended up dropping three more birds but the second round of 9 shots really spooked my little girl.  Despite her being in a state of panic from all the shots and not knowing what to do with three more birds on the water, little Sage brought back the first duck of her life after quite a bit of coaxing and praise.  I was the proudest father ever, but Sage was not so happy.  Back at my side, my little girl let me know how nervous she was from all the loud noises and confusion by jumping up on me, trembling and whimpering with a look of "Dad, get me the f*ck out of here."  The lab of course was not phased at all and was running around the field in circles like a little kid that had just chugged 5 Mountain Dews.  While very proud of my girl , I was devastated thinking she would never want to be around guns again.

On the way home from the hunt, I had a lengthy discussion with Steve and we discussed the temperment of Goldens versus Labs and how I could teach Sage to associate the blast of the shotgun with a successful retrieve and praise, not fear.  The plan going forward was simply to be patient and let Sage dictate the hunt.  I was out there for her, not me.  I felt like I should have known that from the start.

For the rest of early teal season, when Sage and I went out, we simply watched birds with no shooting.  Sage began to learn that "watch 'em" meant birds are in the sky and she'd look up.  Here's a shot of Sage intently focused on a pack of teal that buzzed by us several times: 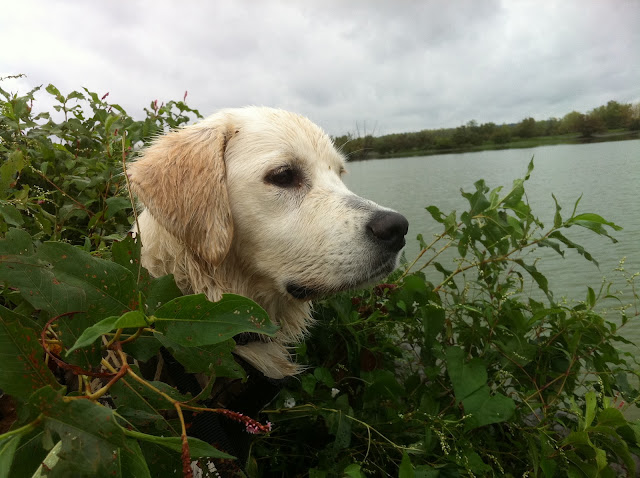 I think all of our recon missions without firing shots really helped Sage settle down in the field.  I also think "watch 'em" has really helped Sage focus on the sky when we're hunting.  Several times this season, Sage spotted birds before me which led to a successful retrieve.  This is Sage saying "pay attention Dad!" 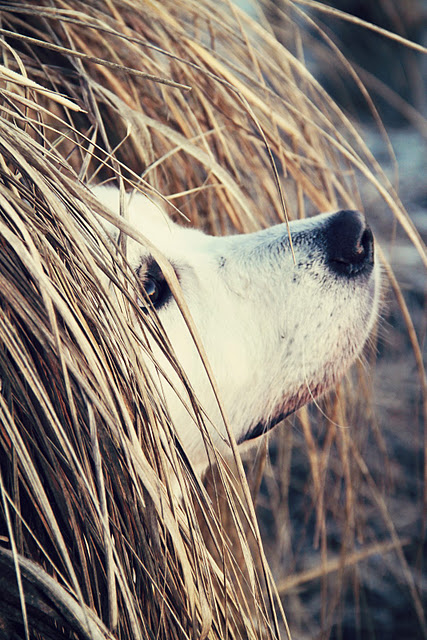 Those first few hunts after "the teal incident" were difficult for me because I don't get to hunt as much as I would like and when I'm out there, like anyone else, I like shooting.  Being patient, however, and only shooting when I knew the bird would fall where Sage could see it and retrieve it really taught me a lot about duck hunting (i.e. you tend to kill a lot more birds when you're patient).  This year I shot several doubles and my first triple ever.  While Sage was not quite ready to start retrieving triples, it wouldn't have happened without her at my side.  My patience also allowed my baby dog to get over her fear of the shotgun blast.  Now, every time she hears a shot, her ears perk up, her tail starts wagging, and she starts scanning the horizon for falling birds.  She loves it!

This season I watched my 9-10 month old Sage retrieve 15 ducks.  While she found and played with several more, she actually brought 15 back to her daddy in the blind.  Now I know this is probably nothing compared to a dog that gets sent off to be trained, but I couldn't be happier with our progress nor prouder of my puppy.  That said, we have a lot of work to do and I'm looking forward to it.
Candidly, I really don't care if we get better from here, although I know Sage could be awesome if I put in the time.  Really, I just like hanging out with her and taking her with me to the woods, the river, the beach, or the blind.  I think Steve put it best when he asked me: "Look man, what is it you're looking for?  Do you want a field-trial master champion or do you want a dog that will hang out with you, pick up a duck for you, and sit at your side and bark at you when your indicator goes down?"
I think the answer is obvious. 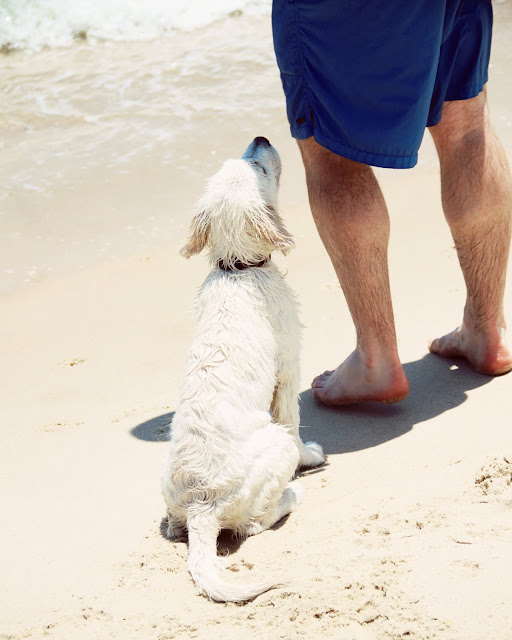 Posted by Missouri Trout Stalker at 9:58 AM No comments:

My fifth year at "Location X" was a good one. Two days on the water, seven fish to the boat and a few more took to the skies. Pictures speak louder than words (and there's just way too much to say about it).
We wait as the sun rises....
Fish in sight.  1 o'clock.  Cast!
Good shot.  Strip, strip, strip.......
BANG!  Fish on!

Nice little girl.
On the board!!
This mamma was a little bigger.

Unfortunately, after a hard fought battle, she won right at the boat.
Fortunately for me, they kept coming.
Last fish of the trip broke my rod.
A nice way to end the trip.
AND I CAN'T FORGET....
Special thanks to my photographer.
Posted by Missouri Trout Stalker at 7:58 AM 1 comment: